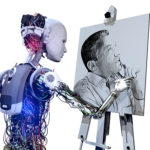 In a surprising turn of events in Japan, a short novel, 80% of which was co-authored by an AI, passed the first stage of the literary contest.[i] With expansive investment being made in the field of artificial intelligence and legal concerns being raised, the extension of copyright protection to AI created works has become the hottest debatable topic.

AI is the multidisciplinary branch of computer science dealing with developing smart machines equipped with the ability to perform tasks ordinarily requiring human intelligence, thereby facilitating a vast usage in the field of agriculture, robotics, marketing, healthcare, business and so on. The AI Algorithm is structured in a way that it simultaneously takes both inputs and outputs to learn the data and produce the outputs when given in new inputs. This concept is called machine learning[ii], which has metamorphosed the technological sector.

Copyright is one of the intellectual property rights which protect the works of authors, musicians, historians, scientists, dancers etc. The work must be original or a new point over the existing piece of work. As mentioned in TRIPS (Trade-Related Aspects of Intellectual Property Rights), the expression of work is eligible for copyright protection but not the ideas, procedures, methods of operation or mathematical concepts as such.[iii] Currently, The Copyright Act of 1957[iv], passed post-independence, is followed in India, along with the Copyright Rules, 1958[v].

The concern of authorship of creations through AI is quite major. Taking into account that there are multiple stakeholders involved during the creation of an AI and at its usage, it creates complexities in determining the “Author” of the end product.THE PROBLEM

AI can be classified into two types of programs. The first case is, for instance, when AI is used as a tool for the creation of an article involving human intervention. A great example is the famous AI writing assistant tool Grammarly.[vi] The software, through machine learning, with a variety of natural language processing approaches, grades and rates the write-ups of the users and suggests changes in the final output to improve the overall quality of writing. In this case, AI is a mere tool being used while the result is based on human effort, contribution, and intervention.

The second case is of AI which creates works on its own and takes action like an independent individual, free from human involvement during the creative process. The AI software in this process has to be trained on various levels to receive the desired output.[vii] This can be explained by taking insights from the interview of self-learned programmer Robbie Barrat. In his interview, he explains that for doing so he utilizes two neural networks. A neural network is different from a preset program because instead of operating based on the rules set, the neural network figures out the rules itself. He uses a “discriminator”, the part of the software that differentiates between an AI creation and a real painting and a “generator” that tries to fool the “discriminator” into thinking that the AI created painting is a real painting by comparing it with a data set of real paintings. The result of this cat and mouse game is the creation of well-painted AI art.[viii]

Here is where the problem arises. In the first case to obtain copyright, the law would recognize the original human creator as the author, as they only have used AI as a tool for pursuing their ideas. However, in the second case, a complication arises since, in essence, the creator and author of the result is the AI. This principle of only a “human” being an author is confirmed by the  Practice and Procedure Manual[ix] issued by the Copyright Office in India where it mandates that a natural person’s details be provided during registration. To solve this issue there are two ways:CONSIDERING AI AS A PERSON

It has become paramount to address the legal personhood of AI, especially after Sophia, a humanoid, has been granted citizenship in Saudi Arabia.[x] If one looks at Scherer’s loose definition of an intelligent system- it says that a system would be considered intelligent if it’s capable of doing tasks similar to a human[xi]. In this matter, AI can be considered as intelligent once we peek into their machine learning system. The process of recognizing the human psyche involves assigning different categories to objects, persons, and people. For an AI, it is first presented with the correct items with their valid classifications. The AI makes connections between the items presented to it and improves further when more data is provided to it. In this process, it learns to recognize and categorize items in a way similar to human thought and consciousness.

The confusion of AI being all creative or creativity of human mind’s application in all the programming behind the outcome is huge, and this largely depends upon how creativity is defined. The work must be above and beyond ordinary. AI is a creative device which is so much more than merely copying things from accessible sources.[xii]  Long time back, India had been following the ‘Sweat of the Brow’, the UK’s doctrine which was adopted in 1900 by UK Copyright Law. This doctrine takes the skill and labor of the author into consideration, rendering the requirement of creativity in work redundant.[xiii] However, a deviation took place in Eastern Book Company v. D.B. Modak[xiv], discarding the UK Doctrine and shifting to ‘Modicum of Creativity’ in order to introduce the prerequisite of minimum level of creativity for a work to be copyrightable.  A doctrine named ‘Modicum of Creativity’ considers originality as existing in work when a sufficient amount of creativity and judgment has gone into its creation.[xv] But, currently, Indian copyright law has adopted the middle path as followed by the Canadian approach, relying on the judgment of CCH Canadian Limited v. Law Society of Upper Canada (2004)[xvi]. In the said case, the Supreme Court of Canada held ‘Sweat of the Brow’ as a low standard to test originality which favors the owner against the public interest, and ‘Modicum of Creativity’ was adjudged as a high standard which implies creativity to be novel and non-obvious and these concepts are synonymous with the patents rather than copyrights.[xvii] The adopted neutral path provides for scrutinizing each case on its individual merits to establish originality.

This concept of creativity can be comprehended by looking at the Next Rembrandt Project. The Next Rembrandt Project, an embodiment of unique creation made by an autonomous AI algorithm, was an attempt to revive the painting style of the Dutch artist, Rembrandt. In this program, a team of 20 data scientists, programmers and 3D printing experts worked together for months. The AI was subjected to more than 150 GB of the works of the artist. The algorithm analyzed and created parameters such as facial expressions, eye color etc. enumerating upto 67.[xviii] The result was the creation of a unique painting that won over 60 advertising awards including the prestigious Cannes Lions. But is this project really unique? It’s an issue raised by the platform Creative Commons in a WIPO conference on AI and Intellectual Property. Their paradigm raises the argument that anything that is not a human creation, automatically fails the requirement of creativity and originality. They contend that the purpose of copyright is to protect the human creative process and not AI’s mechanical process of creativity, dependent upon statistical input.[xix]

In Amarnath Sehgal v Union of India[xx] ,the courts integrated the concept of an author’s moral rights and creativity. The courts said that it is the creative ingenuity and aesthetic that defines their creation and thus, gives the author the moral rights of maintaining paternity, purity and decency.

Practically elucidating, in case of an AI, while it might be an “expert” in its defined function set i.e. creating art, it cannot make decisions for itself outside that field therefore, and it cannot qualitatively and emotionally define its creation like a human.GRANTING RIGHTS TO THE USER

The other solution to this dilemma is to not consider AI as the author at all, rather allow copyright to the persons who are behind the AI which include the programmer or the creator of the software and/or its later user.

The common case made as for the programmer is often to the fact that it is them who poured their heart and soul for the development of the AI application. Moreover, without their skills, the program would not exist in the first place.

However, this way, the rights of the user of the software would be negated. While there is no objection to the claim of copyright of the program made by the programmer, a claim made by them over creations of the user using their program is similar to stating that a pen manufacturer deserves a copyright over the works of authors who used his pen. Moreover, it requires repetitive training through exposure to different datasets.[xxi] The user of the copyrighted AI Algorithm puts efforts and innovatively contributes to come up with advancement, and thus their role isn’t limited to the extent of pressing a button.

Section 17 of the Copyrights Act, 1957 provides that the author of the work shall be the first owner of the copyright. But, there are certain exceptions to it. Section 17(a) and section 17(b) highlight the situations wherein the employer is the first owner of the copyright of the works created by the authors who are employed under them. But a test of whether the work was done under contract of service or contract for service has to be applied.[xxii] We believe that since an AI is exposed to various datasets and trainings, its relationship with the programmer/user will be similar to that of an employee and an employer under contract of service where the former is a part of the business and their work is integral to the business. This is on the lines of Work for Hire Approach[xxiii], according to which the employer is considered as the author even if the employee creates the work. Providing an exception to the general rule of granting copyright to the person who actually creates the work, the approach would enable the regulation of the work created using AI and holding the users or programmers accountable for any damage, counterfeit or infringement, thus putting law in a better place.THE WAY FORWARD

Giving rights to AI would also raise the question of the legal duties or accountability which cannot be expected to be fulfilled by AI without human intervention. From the above explanation, it can be boiled down that legal personhood of AI is associated with legal rights and legal duties. Granting the status of a legal person to AI would cease the creators’ responsibility, leading to their falling back in case of any technical glitch, on the excuse that it acted beyond their wishes or command, and the system of sanction or imprisonment would eventually dissolve. While any middle ground granting AI a set of rights currently imputed to legal persons is yet to be explored, using hire for creation approach won’t only put legal system in the right place, but would also incentivize the people or other entities to make use of creative programs. We can thereby conclude that the user of the AI Algorithm is entitled to the copyright of the resultant artwork.